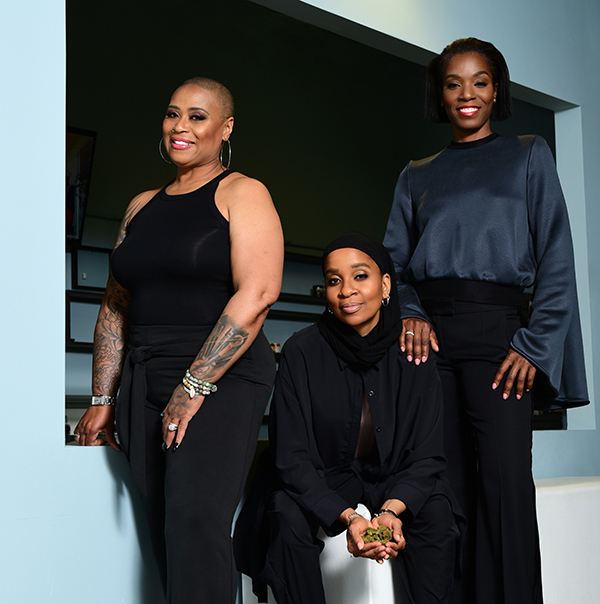 Sahaa CBD Atlanta Gives Back with the Healing Power of Hemp

For centuries, hemp has offered healing benefits for individuals throughout the world. As one of the first-ever agricultural plants, hemp has been widely recognized and used for its herbal and medicinal benefits since the beginning of time. Unfortunately, its relationship to marijuana aided in sudden strict regulations and a negative stigma around the plant. Since the 1970s, our nation has overlooked hemp and its restorative derivatives.

Today, three successful and inspiring black women have set out to uncover the medicinal healing properties of cannabis. The co-founders of Sahaa CBD Atlanta are offering a safe and therapeutic space for their local community to learn and experience the genuine benefits of hemp.

HISTORY OF HEMP IN THE UNITED STATES

Originally cultivated from what is now modern-day China and Taiwan, hemp was first discovered in 8,000 BCE, when people used the plant in natural, hemp-based medicines, pottery, and even in food and drinks. Over time, hemp continued to spread throughout the world, reaching Europe and South America as people began making clothing, paper, and ropes from the plant. Hemp and its valuable byproducts ultimately reached the United States in the 17th century.

The hemp plant was heavily relied upon by millions of people, proving its useful properties for 25,000 products, before it was eventually grouped with marijuana and classified as an illegal substance by the Controlled Substances Act of 1970.

It wasn’t until three short years ago, in 2018, that the plant was removed from the list of controlled substances and made legal once again for commercial production and cultivation in the United States. Nonetheless, the negative drug stigma surrounding hemp remains true for far too many Americans.

The ladies not only retail authentic and beneficial CBD alternatives to traditional Western medicine, but they are also committed to providing a trustworthy, informative, and fact-based experience and for any and all curious shoppers in surrounding areas.

THE EDUCATIONAL EXPERIENCE ON THE BENEFITS OF HEMP

With the amount of admirable wisdom that they’ve gained during their more than two years in the hemp industry, Khadijah, Rasheeda, and Bridgit set themselves apart by providing all of their valuable customers with the possibility to learn about the properties of hemp and discover its restorative impact on the human body. The primary component of hemp is cannabidiol or CBD, which has various health benefits and can be used for more than 20,000 purposes. The sisters at Sahaa offer an unforgettable experience as they dedicate themselves to educating, listening, and helping their customers find suitable and beneficial hemp products for their needs.

At Sahaa, shoppers can learn and better understand the difference between drugs and medicine. While society has stereotyped the psychoactive effects of particular derivatives of cannabis as harmful and dangerous, Khadijah, Rasheeda, and Bridgit are intelligent and knowledge-driven. They extend vital information, including both the similarities and dissimilarities between hemp and marijuana, including the imperative roles of CBD and THC in each. Although they are both composed of CBD and THC, hemp does not have psychoactive properties, while marijuana does.

The three women are also well-educated in the endocannabinoid system, where the human body produces the same properties that are rendered by hemp. In the fast-paced and constantly demanding digital age, it’s hardly possible for our brains to deliver the proper cannabinoids that keep us going. That said, hemp offers benefits that help awaken the ECS and enable our bodies to heal themselves. Although Sahaa may not cure all problems, the uncomplicated business owners certainly commit to helping their customers in every way imaginable.

From the beginning, Khadijah, Rasheeda, and Bridgit set out to assemble Sahaa CBD Atlanta as a way to make a difference in their hometown. The name “Sahaa” is a Northern African expression used when people bathe, shop, or eat. It promotes well-being in itself as it translates to mean, “May that action bring you good health.” The family business provides a safe space that presents an open and therapeutic environment for both new and experienced hemp users to blossom with healing remedies–a journey free from mainstream hemp culture.

In establishing the company, the entrepreneurial women pooled their funds together and ultimately formed their business from the ground up. The well-put phrase sets them apart as the women explain, “We’re not here to regurgitate anyone else’s vision but ours.” A nourished dream became an accomplishment that inspires people—particularly women—of color everywhere to follow their own. Sahaa CBD Atlanta was initially built on trust and continues to thrive on confidence and interdependence.

The hemp industry continues to thrive. And Sahaa CBD Atlanta has found an avenue in which they prosper: collaboration and partnership. The group distinguishes itself through its interdependence upon one another, which aids in all-around business success. What’s more significant is their individuality in the hemp industry despite their dependence on one another. All three women bring something new and unique to the table, resulting in their distinct obligation and goals to offer an educational, calming, and uncomplicated business experience.

GIVING BACK TO THE COMMUNITY

Regardless of the business’s overall success in hemp production, Sahaa CBD Atlanta makes a continuous effort to promote and empower local business throughout the community by rendering the opportunity to be recognized and grow alongside them. While entrepreneurship is not an easy sector, the women generously showcase one brand each month in their East Atlanta storefront, aiding in the expansion and advancement of fellow Atlanta businesses.

Sahaa CBD Atlanta welcomes and encourages all local visitors to stop by, learn about, and try the health-giving and restorative properties of hemp CBD as an alternative medicine.