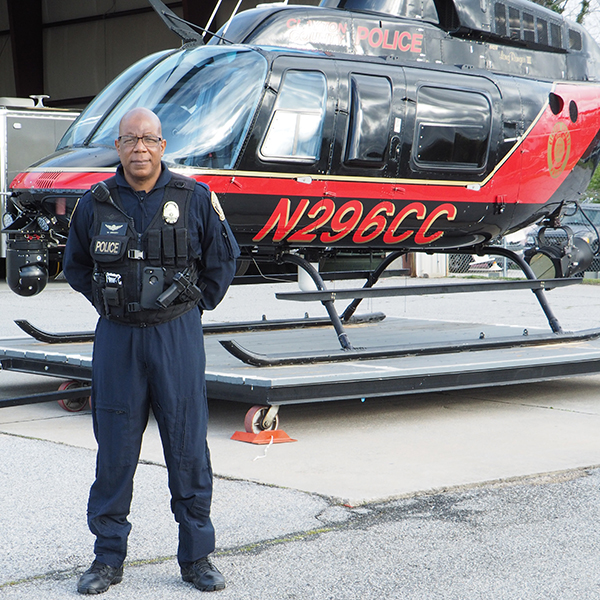 There is a rare bird flying in the skies of Clayton County. As a matter of fact, this bird may be one of the rarest on earth.   The bird is actually a pilot named Willie Gregory, who patrols the sky lanes in his Clayton police helicopter when he is not piloting his private fixed-wing Beechcraft Sierra.

He was lifted into this rarefied air just at the start of 2021 when he was named the first African-American police helicopter pilot as well as being the first in-house trained pilot in Clayton County history.

“It comes with pride and a stressor,” Gregory said recently in his small office surrounded by maps showing nearby airports and restricted spaces, piles of books on aviation safety and weather, and a small case containing a pocket-sized drone. “I have a desire to do well so others can come behind me. I want others to say, ‘If he can do it, I can do it.’ I have a great desire to do well.”

“When once you have tasted flight, you will forever walk the earth with your eyes turned skyward, for there you have been, and there you will always long to return.”

Gregory’s path of becoming a Clayton Police helicopter pilot was a long road that started when Jeffrey Turner was named the first African-American police chief. “He knew I was a pilot. He told me that he was going to put me in the aviation unit,” said Gregory, who by that time had spent 10 years on the road as a police officer.

But Gregory only became a TFO, a Tactical Flight Officer, who does not pilot the craft. Instead, the TFO mans the many complicated cameras that give the helicopter an incredible field of vision. Inside the copter a TFO can read a tag from half a mile away while it can discern a person’s facial features from a mile away. “Before that it was just looking out the window,” said Gregory.

The TFO’s most crucial duty is to coordinate with the officers on the ground. The communication is vital to any police investigation involving the SWAT personnel or the K9 unit.

“Our goal is to assist the guys on the ground and keep them safe,” he said.

Incredibly, the newest helicopter the county owns is 30 years old as well as a smaller helicopter that was made in 1971 and flew missions during the Vietnam War. Asked if he thinks the copters are safe, Gregory responds by saying, “How do you think it got to be so old? They are meticulously maintained. We have the only in-house mechanic in the metro area,” said Gregory. “We just buy the parts, and he puts them in.”

Gregory has recordings of all the department’s helicopter incidents. On one, the helicopter circles about a group of suspects running around a house. Gregory directed the officers on the ground to where one of the suspects was located, and the suspect quickly surrendered. The other one took refuge near some parked cars. His hiding place was easily spotted by Gregory. The suspect gave up without a fight.

One of his most memorable cases did not involve hunting down fleeing subjects. It happened when his helicopter was called to Fayette County – police departments help out other police departments routinely – where an older gentleman had gone missing in the woods. It was on one of the hottest days of summer as the Clayton County helicopter rose from their pad to assist in the search.

The man had been riding his four-wheeler when it overturned. He could not get up to call for help. “Our crew found him in a few minutes,” said Gregory. “We probably saved his life.”

Gregory also is the one of  the department’s certified drone pilots, using the small flying device just a bit larger than a smartphone. The drone allows the police to get real time information on possibly dangerous situations without putting any of the officers in danger.

As a young lad in growing up in Fort Pierce, Florida, Gregory already had his head tilted up and his eyes on the sky. He says he would spend hours near the local airport just watching the planes take off and land. Even then, he could identify every brand and model of airplane.

One day he and his younger brother were outside in his yard when a sheriff helicopter flew so close that Gregory could see the pilot’s face, so they did the normal thing and waved. The helicopter pilot responded by buzzing the youngsters in a playful manner. Later, at a county fair, he was given a ride in a helicopter, which only cemented his desire to fly.

“But I wanted to fly jets,” said Gregory.

At 16 he drove himself to the local airport, and went inside the flight school  office for some information about learning to fly and got a “cold reception.” The white woman behind the desk who did not even speak or get up to see what he wanted. She just pointed to a wall where the flight school literature was located. Shocked and saddened he took sheet and left. One of the flight school instructors walked right past him as he walked out as if he was invisible.

“That was a big letdown for me, because I knew my skin color was the problem” said Gregory, but it did not stop him from following his desire to fly.

Although he won a scholarship in architecture, Gregory still yearned for the sky. A visit to his high school counselor in the 11th grade almost stopped him from pursuing his dream. Why not follow up on your scholarship and study architecture, he was told.

“A lot of times I was ready to give up. But I just couldn’t. It takes a lot of patience,” Gregory said.

He attended Embry-Riddle after graduating. Of some 5,000 students at that time less than 100 were African-American. “I didn’t see anybody who looked like me,” he said. After the first year of studying Aeronautical Science, his funds ran out. He was forced to return home.

His mother was trying to get his brother into the military. Willie went along to the Army recruiters office to support his younger brother. But too found himself interested in the Army. He was asked take a second ASVAB test scoring too high on the first one. which he did after being told not to try so hard on the second test. The recruiter said he could apply to be a pilot after he joined the Army so, he joined with the hope of some day flying helicopters.

He trained to work on Cobra helicopter armament systems. After training he was sent to Fort Hood, which had no Cobras. The newly trained Gregory had to learn to work on the Apache helicopter. He did well in the Army and made it to the rank of Sargent.

He was approved for flying warrant officer in 93, but declined after being told he that he would be sent to South Korea for a year before Warrant school. He didn’t want to go to Korea and eight months later he was honorably discharged.

He set his sights on a new career … as a mortician and moved to  Georgia.

Well, for a young man with his head in the clouds, it was not a good fit to be looking down all the time. He moved on to selling cars at a Dodge dealership before a chance encounter with a truck driver who talked him into going on the road as a trucker for three years. Life on the road was not at all where Gregory wanted to be. When the opportunity came, he joined the Clayton County Police Department.

At about the same time he began to seek the sky again. He started taking flying lessons again, and earned his private fixed wing license. But it would be 10 years as a TFO before he was sent to flight school at the Prestige Helicopters where he became a instrument rated commercial helicopter pilot.

It was while serving as a TFO in 2007 that Gregory’s life changed dramatically when he first met Sonna Singleton. A tornado had swept through the eastern part of the county leaving a trail of destruction through the District 1 represented by Commissioner Sonna Singleton. She and another commissioner were to be flown over the destruction by the Clayton Police helicopter. Gregory was asked to accompany Sonna to the craft. He could tell she was nervous.

“She was so frightened the whole time. I think she was so afraid she could not even look out the window,” said Gregory. It would be years before the two would meet again.

After a chance encounter in 2013, Gregory was showing Commissioner Singleton the different parts of the helicopter. He told her about the craft from top to bottom but slipped in a surprising question in the middle of his talk. “Are you married?” he asked before sprinting on with his presentation before she could answer. They simply exchanged business cards and the commissioner left.

“I called her before she got out of the parking lot,” he said.

They were married within a year.

“She is a tremendous motivator,” said Gregory. “She is like a little momma. She got me to stick with my dream of flying helicopters and buying my own airplane.”

He travels with her to many community events as part of “Team Gregory.” She enlists him to answer public safety questions. He’s become more comfortable in his public appearances. “I go to a lot of events with her. She is on the phone taking calls a lot. But I’ve gotten used to it,” he said.

He has talked his wife into taking a couple of brief trips in his Beechcraft. She is not wild about it, however. “She will jump on a big commercial jet with no problem,” he said.

Gregory’s next challenge is to pass on his love of aviation to the next generation by becoming an instructor. He would like to do it within the Clayton County school system, giving him access to kids who only get to see airplanes and helicopters when they fly overhead. It would not strictly be flying lessons because Gregory said learning to fly an airplane takes numerous skills, meticulous planning, and experience.

“It builds their study skills because it requires them to build their reading skills. There is a lot of calculations associated with flying that they must learn. They have to understand the weather and weather systems. They would learn a lot more than simply flying,” he said. “I’m just planting the seed.”