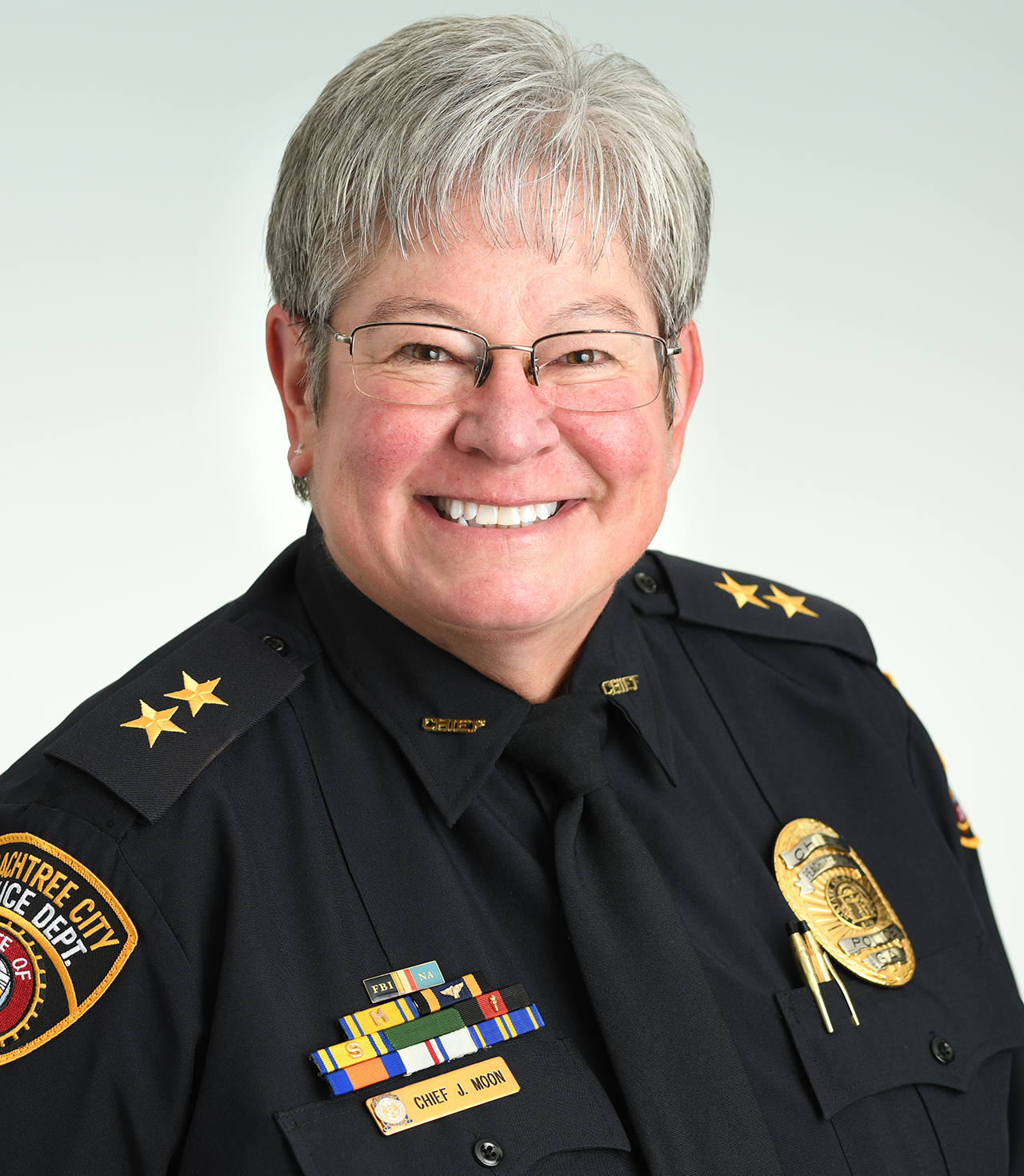 “The biggest tool we have is our tongue,” Peachtree City Police Chief Janet Moon says in her office one humid summer afternoon. “Police officers don’t have to lay hands on anyone to get things under control. I would say in only one percent of arrests do we have to get physical.”

Moon, the first female police chief in the city’s history, displays an effervescent smile and a come-on-in-and-sit-a-spell attitude with her visitor. Her small office is crowded with petite figures of police officers and animals, with an entire shelf of her bookcase covered with photographs of her beloved horses and her recently passed Rottweiler, Tuscon.

“That is Levi; my horse,” she says, picking up the framed photo reverently. There are four other photos of other animals along the shelf. “I don’t even have a picture of my two-month-old granddaughter.”

Her grandmotherly appearance belies the fact that she has more than 30 years of law enforcement experience, ranging from being a MP in Frankfurt, Germany, to becoming the first female motorcycle cop in Rome, Georgia.

Growing up, she never dreamed of a life in law enforcement. Moon envisioned herself in the American version of All Creatures Great and Small, spending her years as a country veterinarian tending to everything from family pets to domesticated cattle.

Today, Moon lives on a 25-acre farm outside Peachtree City where she keeps a menagerie of creatures, including horses, goats, cows, geese, pigs, chickens, a couple of donkeys, and at least one sheep (named Clarice) who lives in the house with Moon’s two teenage nieces.

“It is my stress release,” she says of the farm. “I hate to be in the office.”

Born in Commerce and raised in Cedartown, the native Georgian spent her youth surrounded by animals. Her family naturally assumed that she would become a veterinarian. When Moon graduated high school in 1985, she unexpectedly decided to go into the military where her aptitude test put her in the military police.

“It surprised my mother that I was going to be in the military police,” said Moon.

Stationed in Germany serving more than 40,000 American GIs and support staff, Moon mostly had to deal with soldiers who had a bit too much to drink but it was also the first place she heard the word “terrorism.”

After her four-year stint, Moon was hired by the Rome Police Department, where she served on the field operations bureau directed a community policing program. She was transferred to the traffic unit but was told by an older office, “Women don’t ride on motorcycles!” Not long after that Moon was cruising the streets on her Kawasaki bike as the first female in the department to become a motorcycle officer. During her nearly 12 years in Rome, she would be selected as Officer of the Month numerous times and was named the Officer of the Year before leaving for Suwanee.

Hired as a Captain overseeing the Field Operations Bureau and Communications, Moon was soon promoted to Deputy Chief of Police, where she managed both business and law enforcement operations. Moon’s interest in comprehensive training for all officers led her to guide the Suwanee department to build a $1.9 million substation that featured a training facility.

Six years ago, Moon came to Peachtree City after a chaotic time in the department that saw three police chiefs serving in just one six-month period. The officers and staff were demoralized by uneven leadership and what Moon describes as an “autocratic leadership style.”

She immediately introduced what she calls “servant leadership,” that is treating all officers with respect, directing all officers to use their tongue to talk to the community, and embodying the words “To Serve and Protect.” She set up a system of “community policing” that placed 65 officers on the streets to facilitate communications between the citizens and the police. One neighborhood hosts a social each month attended by police officers and, on occasion, Chief Moon herself. Often, officers can be seen at street parties and other community get togethers.

“There are more officers who commit suicide than are killed in the line of duty”.

“My community officers put a name and a face with the badge,” she says.

Not that Peachtree City is awash with crime, anyway. Moon says the low crime rate is mostly shoplifting and petty larceny, although during the pandemic the city saw a great increase in daytime DUIs. The fact that the city has more than 12,000 registered golf carts that use the extensive golf cart paths around the community led her to experience a unique low-level crime: golf cart speeding.

“The first time I went on a golf cart check I told myself, ‘My life has changed.’ And with 600 golf carts at one high school and 400 at another, when the final bell rings, well, you can just imagine …” she says, not having to finish the sentence.

One of her greatest concerns is the health, both physical and mental, of her more than 65 officers. She has focused her attention on the mental wellness of her officers, especially during the pandemic. Although there was never an extensive outbreak in her department, it did necessitate schedule changes and other hardships.

“There are more officers who commit suicide than are killed in the line of duty,” says Moon.

Moon’s biggest problem, it seems, is finding the digital storage capacity to hold the endless hours of body camera and car camera footage that her department racks up each month. During a recent one-year period, there was more than 16,000 hours of video, all of which must be kept for legal reasons, that required 27.6 Terabytes in storage.

“The body camera shows that 99 percent of the time the officer is doing the right thing,” she says.

Moon recently attained another first for a female. She was “very humbled and honored” to be voted president of the Georgia Association of Chiefs of Police, an organization dedicated to the training of police executives.

Training of her officers is high on her list of accomplishments. To boost non-lethal contacts with suspects, Moon uses money from drug busts to send her officer candidates to a martial arts class. She does this after the officers have completed the 14-week field officer training program at the Georgia Police Academy.

“The resources we have are different outside of Atlanta,” says Moon. “But we supply everything the officer needs except for t-shirt, underwear, and socks.”

Moon stresses using communication rather than force. During her time in the field Moon says she never fired her gun, but she was fired at.

Last year, during the peaceful protests in Peachtree City surrounding the George Floyd incident, Moon personally attended the rallies and talked with many of those demonstrating.

“I told one of the protestors that we are transparent. He actually came to my office and we talked for a long while,” she says. “Now, he is one of my biggest advocates.”

Her advice to anyone who is stopped by the police for any reason: “Comply now, complain later.”

And if there is even a hint of impropriety from her officers, don’t blame the officer.

“When things go wrong, it is my responsibility. When the officer gets things right, they get the credit,” says Moon.