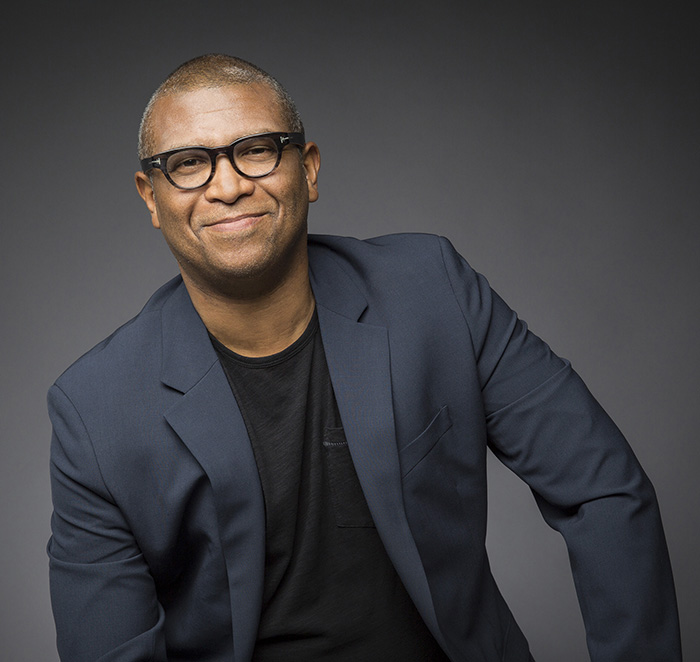 The Black Panther Has Arrived by way of Reginald Hudlin’s blockbuster movie, MARSHALL!

“The Black Panther is Coming but South Atlanta Magazine brought you one of his directors back in October.”

NO MATTER WHAT SIDE OF THE DEBATE you fall on, we’ve all seen racism up close and personal in some way, shape, or form. But it’s usually not the televised images that define our opinions. It’s the everyday interactions . . . the subtle comments, glares, and stares that most choose to ignore or walk away from that gnaw at us the most. Contemplations that sneak into one’s mind’s eye even after the twenty-four-hour news cycle moves on.

We can temporarily escape reality thanks to movies, music, television, or sports but occasionally, they mesh. So, for those searching for a compelling movie starring African Americans who are not portraying maids, slaves, rappers, or drug dealers, look no further than Reginald Hudlin’s latest flick, Marshall.

Photo by Barry Wetcher on the set of Marshall.

Chadwick’s brilliant performance of the Honorable Thurgood Marshall has paved the way for millions to experience his art in upcoming performances.- Reginald Hudlin

“I was always a huge fan of Justice Marshall, and felt that he was underrated as an icon not just in our community but in the American landscape,” explains Hudlin. “One of the reasons why I didn’t want to do the Brown vs. Board of Education (BvBOE) story is because everyone goes, ‘Oh yeah, Thurgood Marshall, BvBOE . . . I learned that in fifth grade. I’m good, don’t need to see that.’ But to see him try a real case that is very tabloid and lurid that we haven’t seen before and don’t know the outcome of . . . that’s noteworthy.”

Inspired and influenced by the work of directors such as Woody Allen and Japan’s Akira Kurosawa, Reginald Hudlin became a student of great films early on. “Everything from James Bond movies to of course discovering Bruce Lee, and going even deeper to seeing movies like Jesus Christ Superstar. Once I get fascinated by something I go pretty far, just looking at everything,” he admits. The East St. Louis native recalls being a “serious movie-goer, from going to the drive-in to seeing films whether it be on TBS or at the local art house theater.” It was only when his brother went to college to study filmmaking that Reginald “saw the type of filmmaking that could be done, and that it could be done outside of Hollywood.”

Mr. Hudlin’s writing, acting, producing, and directing credits have already spanned generations across screens both big and small. From House Party to Boomerang to Django Unchained, his work consistently depicts African Americans in a positive light while staying true to present-day experiences. And with four movies covering Thurgood Marshall’s road to the Supreme Court (sprinkled amid plots focused on other characters) on the horizon, this film reiterates how Hudlin continues leading the way with stories that don’t offer the usual fare.

“Marshall is a film that when people see it they’re always surprised about how fun the movie is. People initially think oh, this is one of those movies that you have to see because it’s very important. They think . . . medicine. But then they see it and are surprised and say, ‘Oh man, I didn’t think I was going to like it!’” reveals Director Hudlin. “They laugh more than they thought they would, find themselves choked up, and then they’re cheering. It’s a really good date movie, I’m telling you male, female, young, old, I don’t care who you are; people are going to have a great time when they see Marshall.”

Set in 1941 (nine months after novelist and short-story writer Richard Wright published his ironically parallel/fictional novel, Native Son), Marshall is based on a court case that transfixed a region, with some deeming it a “sensational sex mystery” when it played out in real time. Emmy winner Sterling K. Brown (This is Us, The People v. O.J. Simpson, American Crime Story) portrays chauffeur-butler Joseph Spell, accused of rape and kidnapping by his employer, a white socialite from old money (Kate Hudson; Almost Famous) who also claimed he hurled her off a bridge in an attempt to cover up the crime. “It was the kind of case like far too many modern-day situations where people think well, this guy is no angel; he’s not Rosa Parks,” clarifies Hudlin. “He’s the guy with a checkered past who has done a lot of shady things, and everyone tries to decide whether he’s guilty before the trial even starts.” While aspects of the film are comparable, others are very different. For example, the alleged crime was committed in Westchester County, New York and the case was tried in Connecticut as opposed to the South–the usual location in such accounts and a historical piece rarely visualized on-screen.

Yet even up North, this mirrored the typical open and shut case. But that notion quickly goes left when 32-year-old NAACP attorney Thurgood Marshall–in the form of Chadwick Boseman (42, Get On Up, Black Panther)–brings his talents to Greenwich. Unable to represent the accused as per the Judge’s ruling, Marshall links up with a homegrown, inexperienced Jewish insurance defense lawyer (Josh Gad; Frozen, Beauty and the Beast) who believes the media hype proclaiming Spell’s guilt. Charged with proving Spell’s innocence to not only an unapologetically racist prosecutor and public, but inevitably his own co-counsel, we get a glimpse of Thurgood’s legal skill set which helped lay groundwork for 1954’s landmark BvBOE case and ultimately propelled him to the Supreme Court bench.

Co-written by Michael and Jake Koskoff, this screenplay coupled with an all-star cast easily transports moviegoers to the era and engages them in the courtroom drama. Described by Hudlin as “an absolute joy to work with, so talented and so smart,” Chadwick brings incredible intelligence and authenticity to the lead role. “He’s just such a perfect collaborator. We had a great time working together, it’s just like hey, how many other movies can we do? (laughs)”

We also get to experience the culture and energy of Harlem via Marshall’s Sugar Hill home, jazz-infused social life, and his celebrity friendships which inspire some notable cameos. “[Novelist, folklorist, and anthropologist] Zora Neal Hurston is such a big, important personality, and I knew she had to be played by someone special. So, I called [actress/singer/songwriter] Rozonda ‘Chilli’ Thomas (of the R&B/Hip-Hop group, TLC) and asked if she could fly out for a day and do this role–she agreed without even a second thought,” recalled Hudlin. “And when Chilli came on set, everybody lost their minds. The whole cast was excited and happy because they didn’t know she was going to be there. Chilli is just so great and so professional, it was an absolute pleasure to have her involved.” Jussie Smollett (Empire, Alien: Covenant) rounds out the cast as Langston Hughes, the famed poet, activist, novelist, and playwright. “Thurgood also went to Lincoln College with Hughes and [jazz singer/bandleader] Cab Calloway. Marshall was a baller, and he hung out with ballers,” adds Hudlin through laughter.

But what resonated most with the film’s Director is the response received from those who knew Justice Marshall best. “So he belongs to all of us, right? But when this is your husband, your father, your grandfather, it’s very personal. So, when his family and friends tell me that’s how he was, or when I talk to people who clerked under him that say I can’t believe you got all of the little details, his swagger, his sense of humor, all the little things that people may not know about him, it’s so important. The folks who knew him well were very supportive of the film.”

Thurgood Marshall was sworn in as the first African American Supreme Court Justice on October 2, 1967; fifty years (and eleven days) later we get to relive one of his early cases in theaters nationwide on Friday, October 13, 2017. “The American dream was a promise, and this film shows the huge part Justice Marshall played in making that a reality,” Hudlin praises.