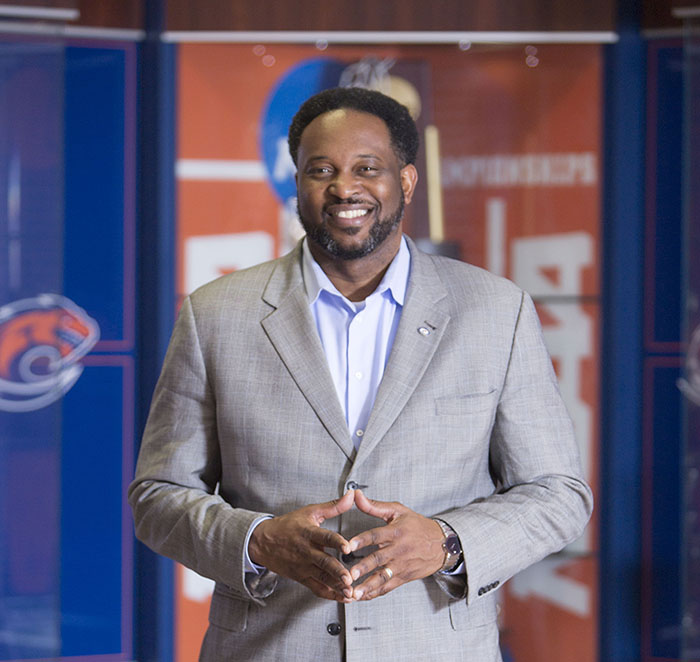 Tim Duncan is in his fourth year as Director of Athletics at Clayton State University and despite the massive success of the many athletic programs at CSU before and during his tenure, you’d think the former sports marketer and Division I basketball player would be able to relax a bit. “My time has passed by very, very quickly,” said Duncan of his time in Morrow. “I appreciate the journey but the most important goal is graduating these student-athletes.” In other words despite the fact that both the men’s and women’s basketball teams are above .500 late in the regular season and the reality that both will have good shots at winning the Peach Belt Conference (The Clayton State women’s basketball program wion a Division II national Championship in 2011) and getting an automatic bid to this year’s Division II NCAA tournament Duncan can’t relax. He just can’t. “I started career working at two Fortune 500 companies before I started working in collegiate athletics but this career is me fulfilling my purpose,” says Duncan, 47. So Duncan will be on pins and needles until the May 5 commencement.

Walk into Duncan’s office at CSU and look to your right. On the wall will be a 3 ½ by 3 ½ frame containing a picture of the first group of student-athletes he worked with at Clayton State. His relationships with the student-athletes at the school is different from a lot -not all, with all due respect- of the Division I and Division II athletic directors. Duncan, a Memphis, Tennessee native, played the game at a high level and has, literally and figuratively, been in the shoes Lakers athletes are in today. “I talk to them about my experiences,” said Duncan who played his college basketball at Memphis State (now just Memphis) with NBA guards Anfernee “Penny” Hardaway and Elliot Perry. “Having played college basketball gives me a bit of credibility. They can identify with me and I with them.”

Duncan doesn’t give the Lakers athletes the same old speil, he can’t do that with an honest attempt, not after the career that he has had. Duncan’s journey to Clayton State University, just like a lot of their journeys, is far from the usual route to college. While discussing former Lakers cross-country and track standout Marcus Lafleur (Class of 2017) he quickly transitions to talking men’s basketball, “They are playing really well right now, we’re excited about their momentum,” said Duncan about what as of Valentine’s Day was a nine-game win streak.

The original Tim Duncan wasn’t, well “the other Tim Duncan” when he matriculated to Memphis State some 30 years ago. He was a kid from the city getting his basketball and academic careers started. Duncan knew he belonged on a college campus academically and he knew he could play on the Division I level following a stellar high school basketball career but everything else surrounding his move to college, well, let him explain that. “I was prepared academically, but, socially I wasn’t as focussed as I could have been,” he said one afternoon from his office. “Most of our student-athletes are a lot more focused than I was. A lot of them have come to Clayton State with a plan. I had no clue what I wanted to do after graduation.”

During his college basketball career Duncan had a chance to play with other Memphians like himself, guys like Perry, who he considers a great friend till this day. The two recently had lunch and caught up on old times. His time with the Tigers is something he holds dear. Duncan found his way in the end and went on to begin a successful career in the business world as a marketer, including stints with RJ Reynolds Tobacco Company working on NASCAR Winston Cup and Russell Athletic. Sports were never too far from Duncan’s life and he knew he would be back in the game one day in one way or another. He got his chance at the athletic director position at Paine College, a Historically Black College and University (HBCU) in Augusta before he moved to the South Atlanta Metro area to start with the Lakers. The husband and father of five (including two adult children), his wife Lisa works in Clayton County government, is doing what he loves and it reflects in the way he communicates with the athletes and coaches he works with.

The business of being an athletic director has not been all graduations and salutations for Duncan, he’s an administrator at the end of the day and has to make tough decisions. The Division II level is not as strongly funded as the Division I level in most cases and Duncan has a delicate balancing act that he must routinely perform. “Personnel decisions are always tough,” he says. “Over the past two years we have managed to stay under budget and over the past five years we have worked to reduce our overall athletic expenses.”

There have been some losses off the court at Clayton State as well and Duncan understands that this is part of his overall mission as an AD. His time as an athlete has prepared him to take losses and get back up again. “We have had to make some difficult choices,” said Duncan of the suspension of the Lakers women’s tennis program earlier this year. The school honored those scholarships and that was something Duncan felt was a priority. “They are still Lakers and are still student-athletes here at Clayton State,” said Duncan.

Having an athletic director that remembers playing sports and going to class while balancing a student’s budget is a valuable asset that Clayton State and the school’s student-athletes are blessed to take full advantage of. “Thirty-five percent of our student-athletes are international students and on a daily basis I get the opportunity to talk to kids from Mexico, South Africa, Europe and Asia,” says Duncan of the multiracial international makeup at his place of business. “I have learned a lot from just being around these young people,” he continues. “At Clayton State we embrace diversity.”

The original Tim Duncan, not the soon-to-be NBA Hall of Famer and former San Antonio Spurs great but the former Memphis State Tiger and current Clayton State AD, is doing great work these days. He might end up being the Tim Duncan that Clayton County and south Atlanta residents start thinking of first when it comes to basketball.