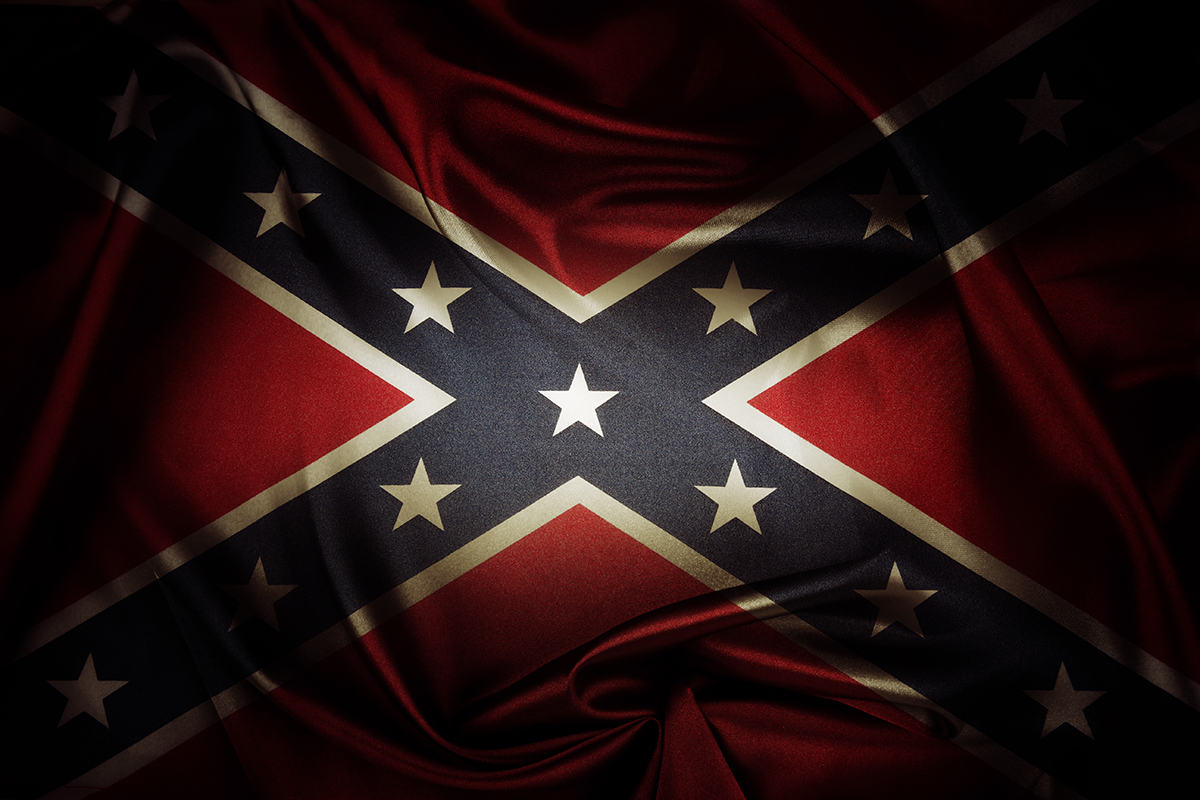 Heritage of Hate; How the Confederate Flag Divides Us

I AM A PROUD SOUTHERN WHITE guy raised in the segregated South where the men were all Clark Gable handsome and the women were as strong as Vivien Leigh and as kind as Olivia de Havilland.

As a youngster, I was told heroic exploits of Confederate generals Robert E. Lee and Thomas “Stonewall” Jackson as they outwitted the dumb Yankees who had the gall to invade our fair country. In my family, the events of 1860 to 1865 were called “that late unpleasantness.”

On a trip to Stone Mountain one summer when I was six or seven my grandmother bought me a Confederate cap with a large stars and bars flag on its crown. I wore it on the train that puffs around the mountain and, while leaning out to watch an Indian raid on a white town, it blew off. I tried not to cry but I did. It was gone forever.

My uncle had the coolest cars, usually old models that he would fix up and make into muscle machines that he would take out on Friday nights and drag race with his buddies down 14th Street. On one of those cars he had placed a tag on the front bumper. It was a dumpy, white-bearded Confederate soldier, looking more like one of the seven dwarfs than a fierce warrior, who had a stars and bars flag draped over his shoulder. Next to this cartoon character were the words, “Forget Hell!”

At some point that tag disappeared. I didn’t find out from my aunt until months later what had happened. My uncle had taken the tag off himself when he started working with a carpet company as an installer. My aunt said two of the guys my uncle worked with were “Negro men.” I didn’t understand at the time when she told me the tag made my uncle “feel uncomfortable” around his fellow workers.

Today, as a person proud  to be Southern but more importantly proud to be an American, I do not understand the continuing fascination with the Confederate stars and bars, a flag that fought against MY flag, the stars and stripes with the beautiful field of blue on which fifty white stars famously fly. I have some friends who say their use of the so-called Confederate flag is to honor their long-ago ancestors, not to put down any group or race.

But when I explain that the flag they celebrate had a special purpose, and that sole purpose was to be used in battle against MY flag, they generally don’t believe me.

You see, the official flag of the Confederate states was NOT the stars and bars, although that was a portion of a later national flag. The first flag of the Confederacy looks almost exactly like the current state of Georgia flag, except it did not have the Georgia Seal (those three columns of Wisdom, Justice and Moderation) in the upper left field of blue. They both share a circle of 13 stars.

So where did the Confederate flag we all saw in Charlottesville, flying next to the swastika banner, come from? The Army of Northern Virginia had used the second national flag when going into battle but it was confusing to them damn Yankees. With its great field of white it looked like the Rebels were surrendering. They began to use just the stars and bars, and they called it their “battle flag.” It was only to be utilized when going into battle.

It is a flag to be used when you are going to war. Back in 2003, when the Georgia legislature was debating whether to change the state flag from using the stars and bars as its main element, some of my friends were incensed that they could desecrate history so easily. “This is not history,” I said. “This is racism.”

The stars and bars were not permanently on our state flag, you see. It was placed on the flag in 1956 in opposition to the Supreme Court’s Brown vs. Board of Education ruling that brought desegregation to the nation’s school systems, although it would take more than a decade to fully implement. It was the state of Georgia declaring war on the US government, again!

The myth of the Lost Cause still permeates among many white Southerners, who bask in the belief that somehow the Confederacy was right, which makes slavery right, and religious intolerance right, and male supremacy right. None of these are among those qualities that make America great.

According to one website, there are 174 publically-supported spaces dedicated to the Confederacy in the state of Georgia. I’ve traveled extensively throughout the state and I have seen many small-town squares with a Confederate soldier statue, complete with a concrete version of the stars and bars, watching over the place. Very seldom have I seen a statue of a World War I soldier or a World War II soldier, and I have never seen a statue of an American soldier from the Korea or Vietnam wars (although there must be some, somewhere in this state).

I love history. I have read almost every book written about Robert E. Lee and many about Stonewall Jackson. I’ve watched Ken Burns’ documentary on the Civil War at least twice. And I’ve read books about a real Southern rebel named Rosa Parks, whose strength and moral courage inspires an old Southern white guy like me to this day.

I do not advocate the sand blasting of Stone Mountain with its huge carvings of Southern heroes (Lee, Jackson and Jefferson Davis), but I do desire to see carvings of Martin Luther King, Jr. and Harriet Tubman placed on either side. Take that KKK!

The last time I went to Stone Mountain, which has been a few years now, they had an incredible laser display on the mountain side that animated the carvings as Elvis Presley sang a mixed version of “Dixie” with the “Battle Hymn of the Republic,” and as a laser-defined outline of the northern states and southern states came together as one, Elvis sang “America the Beautiful.”

We cannot forget our history, nor should we. The United States was forged with blood and sweat and tears. The fact that we once fought brother against brother is not to be swept away with our still emerging bright and beautiful country.

Of my friends who think the stars and bars are part of their heritage I cannot agree more. It is a heritage of hate, however. It is a heritage of being in opposition to MY flag. In the many books and articles I’ve read about General Lee, he was adamantly opposed to Southerners continuing the war against MY flag. At Appomattox, he told his troops to lay down their arms and banners to return home.

By General Lee’s own words, waving the stars and bars and calling it heritage is simply wrong. I believe that those who do this are looking back at some mystical period rather than forward towards reality. It was heartening to learn that one of General Lee’s great-great grandsons went to his church recently and told them that the stars and bars are a sign of racism. He utterly rejected the idea that flying that banner was any part of his heritage.

My grandfather called himself an “unrepentant rebel,” but he had several African American friends and co-workers. He called himself a rebel not because he was a racist–although he could spew obscenities about black people, Jews, Catholics, Republicans (this was the 1960s when the South was solidly Democratic), foreigners, and the French (don’t ask me why)–but because he thought the US government was too damn big and too damn invasive and too damn expensive.

He never once flew the Confederate battle flag. He did keep a small stars and stripes flag sticker on his truck.

As I watched the shameful events of Charlottesville unfold I shuddered at the images of the Confederate battle flag marching through a historic Southern town. It made me uncomfortable.

I thought of my uncle, a hardworking, honest white man, who on his own, leaping directly from his soul, was uncomfortable with this symbol of hated for MY flag.

He didn’t have to do it. He didn’t have to take that stupid flag tag off his car. He never even mentioned it to me or anyone except for his wife, I think. Yet, somehow, he knew that something he felt connected to was, at the same time, making other Americans think of an era when they were in chains, chattel for the benefit of the masters.

The Confederate battle flag is part of our shared history, and it always will be. But that flag deserves to be relegated to museums where it belongs. It does not belong in the streets of Charlottesville, or along Peachtree Street, or on Pennsylvania Avenue.

My uncle, God Bless his white, pasty soul, looked into the future and saw a time when trying to regain the Lost Cause was, well, a lost cause. He taught me a valuable lesson about being a white guy in the South: be proud of what we have accomplished together and don’t look back. It just makes you feel uncomfortable.