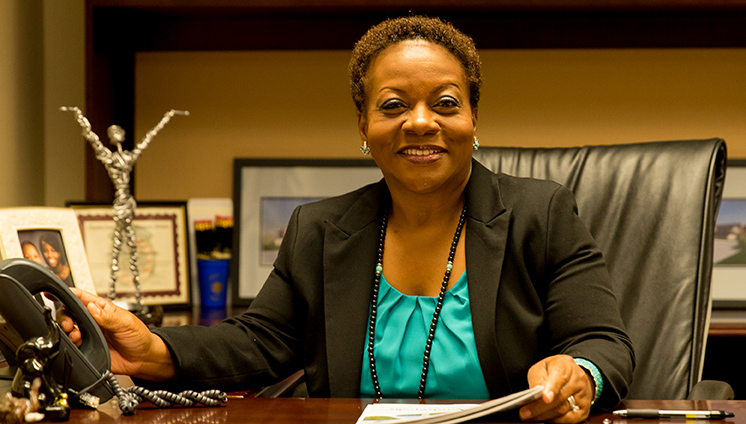 Don’t call sonna singleton gregory a politician. “I really don’t like that word,” the diminutive Commissioner for Clayton County’s District 1 said recently at the Rhodenizer Recreation Center in Rex. “I like service.”

When she ran for office the first time she didn’t even act like a politician. “The person I ran against, I couldn’t say a bad thing about him,” she said, smiling. “I said ‘this is an awesome gentleman,’ so it was a tough race to run. I didn’t think he was a bad guy; I just felt the community needed my voice.”

Her road to politics – sorry, service – began with her community activism, which started almost the moment she moved to Clayton County in 1992. At that time the county was changing with older empty-nester folks moving out and younger people with families moving in. These younger citizens, for the most part, could not afford to buy a home, so they rented. Sonna saw her east Clayton neighborhoods losing their Homeowners Associations as the transition was underway, and she knew the quality of life would suffer if the neighborhoods deteriorated from lack of involvement. She organized a Community Association, an idea that has since spread far beyond her district borders.

Sonna put together neighborhood watch patrols, started a community newsletter to keep everyone informed of local happenings, and built relationships with community businesses to support clean up efforts. She was quickly dubbed the “Neighborhood Association Lady.”

As a member of a rather large rural family – Sonna is one of 14 sons and daughters of sharecroppers from the tiny town of Snow Hill, North Carolina – she early on learned the value of working with a group to attain a common goal. Their family farm had pigs, tobacco and corn, and each kid had specific duties to perform each day. “I’d come home from school and I’d be feeding the pigs,” she said. The siblings had to amuse themselves. One of her fondest memories is taking pictures on Sunday afternoons when the kids came home from church all dressed up. She said the greatest fun of all was just doing nothing with her brothers and sisters.

“We did a lot of simple things that kids would probably laugh at today,” she said.

After her father became ill Sonna’s mother took a job as a domestic to keep the family fed. Her employers often gave her old magazines, books and even textbooks that she would bring home for the kids. “So we were able to see the world outside of Snow Hill,” Sonna said. “I wanted to see some of those things I had read about.”

Years later she was able to travel to one of the favorite places she had at one time only experienced through books: Hawaii. But first she finished college, spent a year in Washington, D.C., with one of her sisters, and then returned to Snow Hill. However, the little place seemed even smaller to the young girl in her early twenties. “One day I packed my little Honda Civic, and with $200.00 headed for Atlanta. That is when you are young and invincible,” she claimed.

Her neighborhood activism led to a stint on the 2003 SPLOST (Special Purpose Local-Option Sales Tax) Committee where she advocated for various recreational improvements in east Clayton. Her work with that and subsequent SPLOST efforts has led to the creation of the Rhodenizer Recreation Center, a local police precinct, walking trails, an animal adoption center and a planned Senior Center.

Elected to the Clayton County Commission in 2006, Sonna is now in her third term. Unlike other politicians, she has no desire to run for any other office because, she said, by working in “local government you get to impact people, and I have a lot more service to do.”

Ask her about her ultimate accomplishment as a commissioner, Sonna doesn’t hesitate. “I feel that one of the most satisfying things for me is giving people access.” She tells the story of getting a phone call late one evening from a neighborhood grandmother about the Movies in the Park series that Sonna had helped put together.

The grandmother said she had eight grandbabies. 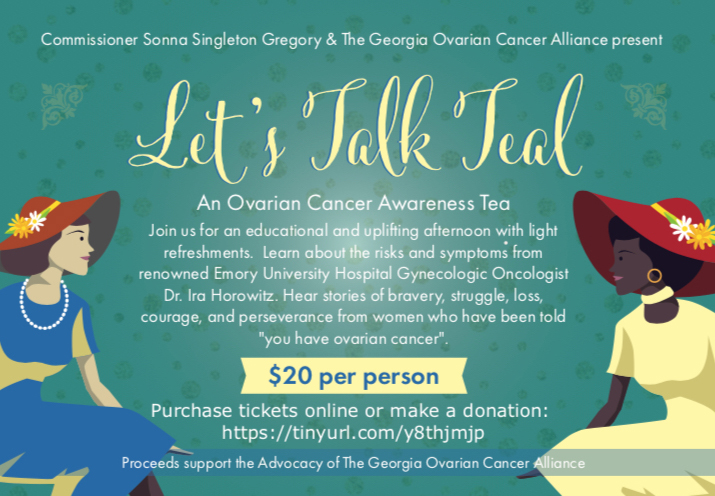 “She asked, ‘Can I bring all of them to the movie?’ I can’t imagine that this grandmother could afford to take eight kids to the movies.   Just knowing that I had some impact on those Movies in the Park where this lady can bring her grandkids and they can enjoy a good movie. It is fulfilling,” Sonna said. “It is calls like that one that make it worth it.”

Recently, Sonna got a call she did not want to receive. She was diagnosed with ovarian cancer. “It was probably the scariest moment of my life,” she said. Here she was enjoying life with her new husband, Willie Davis Gregory, Jr., a 20-year veteran of the Clayton County Police department, and telling her 20-something daughter Jordyn that she should put off having kids for a decade or so, and in an instant all her visions of the future were shattered.

“As an elected official you are always negotiating. This is one time I can’t negotiate,” she said. “You never imagine yourself in that place, but once you are in that place you gain so much strength. I’ve got a will to live.”

Sonna wanted to retire and grow old with her husband; she wanted to hold her grandchildren. And then she thought that there were a lot of people, some of whom she had never met, who were depending on her. “I’ve got to get well because I’ve got so many things to do,” she said.

Her greatest fear, it turned out, was losing her hair to the six months of chemotherapy she underwent. She endured and today has been declared cancer free. In addition to her public service and her many and varied volunteer endeavors, Sonna has become a spokesperson for the Georgia Ovarian Cancer Alliance.

“I am now on a mission to save other lives,” she said. “Too many women are still dying from this cancer.” A cousin she grew up with was told she had ovarian cancer in 2006, and the next year she was dead from the disease.

According to Sonna, one in 55 women will contract ovarian cancer, and many of them will go undiagnosed because this particular disease is hard to track. Sonna said her story is typical of many women’s story about ovarian cancer. She had gone to the doctor numerous times but nothing was found, despite her telling the doctor that something was not right with her body.

“I talked to some third- and fourth-year Emory medical students about it. I told them to please pay attention to what their patients are saying,” she said. “I tell women, ‘you know your body better than any doctor.’ If that doctor is not telling out what you need to hear, go find another doctor.”

It is fitting that a public person who has the uncommon idea that she is not a politician should have a most uncommon name. According to the website nameslist.org, there are only 398 people named Sonna in the United States today, and the name has not been recorded for any baby born after 2003. Sonna believes the name means “gold,” and comes from the Sanskrit language. According to the Urban Dictionary, Sonna means “too precious to put into words.”

However, within her large family no one uses names but rather numbers equal to their birth order. Sonna, by the way, is number 11.

You may call Sonna unique, number 11, a survivor, an elected official, a proud mother, a loving wife, a committed activist, a neighbor, a risk taker, a Clayton County booster, but, please, don’t call her a politician.

“As crazy as I seems,” she said, her eyes gleaming, “I enjoy public service. There is much more to do.”