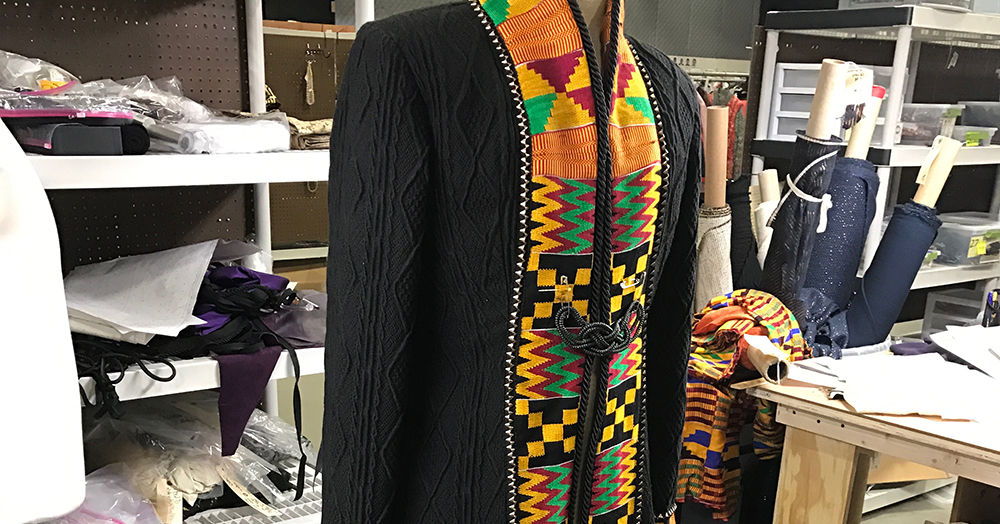 From Black Panther’s opening scene, costume tailor Carl Ulysses’ influence is felt as a young T’Chaka miraculously appears at the doorstep of his lawless brother, N’Jobu. The confrontation is set in modern-day California, but the warrior’s wardrobe exudes his royal ancestry. “He wears a sash and a belt, and it was draped so that you wouldn’t think that it was kente cloth at first sight. The roped sash is made of red, yellow and maroon kente, piped with purple leather. A lot of our costumes were paired with leather because they wear a lot of skins in Africa. So, I cut out these different shapes for him to wear on top of the sash. And those were actually some shapes that we found in African picture books.”

It is details like this that legitimized these fictional characters on screen. Of course, the all-star cast and writing coupled with Marvel Studios magic produced a distinctive, timely film. But the authentic costume design effortlessly transports audiences to Wakanda while also encouraging moviegoers worldwide to show off their African garb.

“I love comic books, period. But I just loved Black Panther because as a child this was a superhero that I could say, okay, he looks like me. This could be me. Which makes all of this kind of surreal,” expresses Carl, who spent his formative years doodling and sketching anything but clothing. Now he has dressed King T’Challa (Chadwick Boseman) in what has been deemed the top-grossing superhero movie to date with ticket sales topping $1.3 billion dollars worldwide according to Bloomberg. “The first time I saw the Black Panther costume I was just blown away. I was like a kid in the candy store,” he adds.

His expertise in the industry has garnered numerous celebrity clients like Tyler Perry; NBA players John Collins of the Atlanta Hawks and Rob Covington of the Philadelphia 76ers; as well as a number of comedians like Faizon Love, JB Smooth, and Rickey Smiley just to name a few. But while Ulysses enjoys working in the entertainment world he relishes tailoring for his clientele, and it shows as in the midst of our interview a groom-to-be arrives for a quick fitting. I can’t help but notice the detailed patte 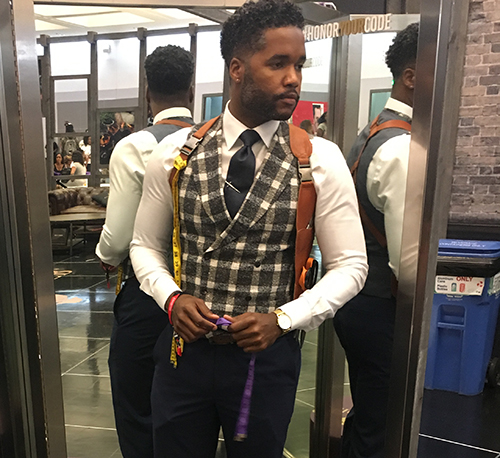 rn that makes the navy-blue dress pant he’s hemming “pop.” Paired with a burgundy velvet jacket, some Atlanta bride is about to be blown away as she walks toward her man waiting at the altar. Carl invites me over for a closer look and although still held together by pins, the ensemble looks incredible. He then lifts the back collar to reveal a verse from the Bible embroidered underneath. “I love breathing life into weddings and adding personal touches that have special meaning to the couple,” he raves.

Designing King T’Challa’s royal robe took five to seven months alone. “Everyone on the team was assigned a character, and besides the robe I did other pieces for Chadwick

as well as T’Chaka. I loved doing it, but it put a lot of pressure on me because hey, maybe somebody else wanted this opportunity, you know?” queries Carl. “I knew that I had to prove that I could do this the way [Head Costume Designer] Ruth Carter envisioned.”

As the youngest tailor on the Black Panther set, Ulysses was responsible for designing costumes for T’Challa’s most memorable scenes, including the shorts he fought M’Baku (Winston Duke) and Killmonger (Michael B. Jordan) in. “We always had to think about how items could be worn easily and not just how it would stand on a mannequin. We had to think about the functionality of the costume, how the actor would move–and how he would look while moving–in the clothing, even though there were so many pieces that had to be put together. For example, if you had a belt, a pair of shorts, and a sash, how could you stylishly connect them? I’ve never worked on a project quite like this, and it was an amazing experience.”

Director Ryan Coogler and Ruth traveled to Africa to research the tribes and culture, bringing back plenty of information and materials for the team to work with. Symbolic African pieces were chosen such as dogon masks, talismans, and different beads, which ensured that costumes looked realistic not just to Americans but also to Africans. “Even though it’s a mystical land, you’re still depicting African tribes. We modernized certain aspects of the culture, and Ruth did a wonderful job of actually pulling different pieces from these tribes that not only inspire but feel and look ancient and realistic,” explained Carl.

Carl’s career trajectory has been eclectic, to say the least. While attending Riverdale High School he dreamt of playing in the major leagues, but woke up when he threw out his pitching s 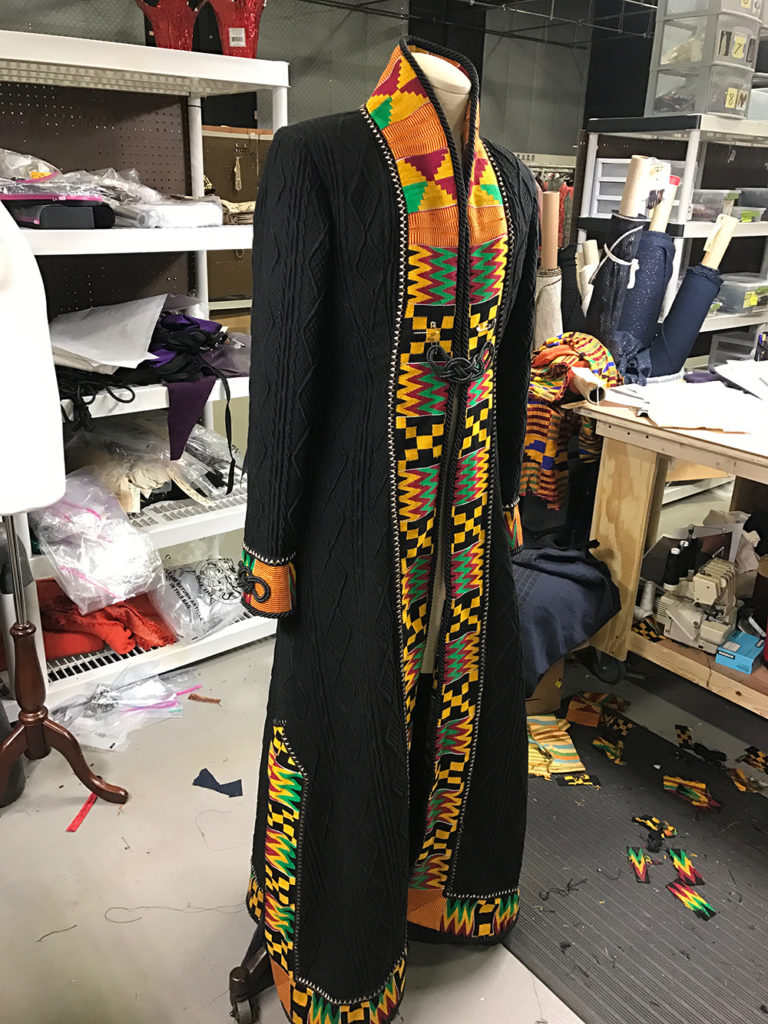 houlder lifting weights. “I threw phenomenally but that injury hindered me, and dropping down even five miles an hour is huge in that sport,” he acknowledged. Although Ulysses threw hard enough to earn baseball scholarships from multiple HBCUs, the Atlanta native eventually chose to pursue a biology degree at Morehouse College.

Despite scoring in the top one percentile of his class, it quickly became clear that medicine wasn’t Carl’s true calling. Rotations with the Minority Medical Education Program at Duke University Medical School included a solemn run in the neonatal unit, unruly kids in the pediatrics and family care units, and ended by witnessing what looked like someone’s face falling off in the ER. After returning to Morehouse, he changed his major to psychology.

That’s when a young lady saw some of Carl’s sketches and encouraged him to pursue it. He halfheartedly registered for a beginning sewing class.

“We had to make two items, so I chose a jacket and pant. Other students were making T-shirts, skirts, blouses, pillows, things like that. We got graded based off two garments, and the professor thought a suit was too advanced for me,” he recollects. “I was a bit older than everybody else, so I went straight for the suit.” Working round the clock paid off–the suit came out great, impressing his teacher and solidifying Carl’s new calling. But spending the past three years in pre-med mode meant he had to play catch up.

Ulysses took his talents to American Intercontinental University (located in Buckhead at the time) after graduation, only to discover that they solely trained in women’s wear. “They told me I was going to have to teach myself how to design menswear. That didn’t sit well with me, so I dropped out and apprenticed under a tailor.” Whoever said when God closes a door he opens a window must have had this young man in mind, as his career traveled at light speed from that moment forward.

After a short apprenticeship and a modeling stint, Carl got the opportunity to make clothing for the late Mychael Knight, a designer on the Project Runway television series. “I made him a leather double-breasted vest for his birthday. At that time everybody knew me as a model not a tailor, and I saw one of the stylists that I previously modeled with. She inquired about Mychael’s vest and I told her that I made it,” he recalled.

“I don’t know about that . . . no, you didn’t,” she assumed as the words caught up with her facial expression. Soon thereafter, Knight approached Ulysses to personally–and publicly–thank him for making the vest. As luck would have it, said stylist was dressing songstress Janelle Monáe at the time–which led to Carl getting an opportunity to design for the Hidden Figures actress.

Two years later Hurricane Katrina hit, and Louisianans looking for work and refuge flooded metro Atlanta. In turn, fashion jobs were relocating to New York City so Ulysses took his last $500 (immediately reduced to $350 after he was forced to pay overweight baggage fees) and followed his dream to the Big Apple.

Carl would get to tailor with some of the fashion industry’s biggest names over the next four years. Upon arrival in NYC, he worked with Jane Rosenthal (founder of the Tribeca Film Festival) and went on to style actresses Jessica Biel and Elizabeth Banks. In between tailoring gigs Carl also worked as an assistant buyer at Ross Dress for Less and Macys; but the telephone call received in the fall of 2013 would pave his road to Wakanda. “My friend Kevin Mayes (Head Tailor; Black Panther) basically told me that I needed to move back home and work as a tailor for film.”

Tax incentives offered by Georgia’s Entertainment Industry Investment Act helped open the floodgates for Ulysses. Mayes immediately brought Carl in as tailor on the film Barely Lethal which also employed Francine Jamison-Tanchuck “who was the costume designer on many movies, such as Glory. She then hired me as head tailor for Miracles from Heaven, All Eyez on Me, and Detroit, and I’ve been working in the film industry ever since.” Carl’s résumé spans big and small screens alike, with highlights that include television’s Drop Dead Diva, Powers, The Game, Zoe Ever After, Love Thy Neighbor, and The Haves and the Have Nots. His filmography includes: Captain America: Civil War and Barbershop: The Next Cut, with head tailoring credit on Game Night released earlier this year. He is currently tailoring on the BET miniseries The Bobby Brown Story, as well as Son of Shaft, The House Next Door, and Nappily Ever After, among other flicks.

It seems unlikely that a scene where a character simply dons a robe could emotionally stir millions. But that’s exactly what happens as King T’Challa swaggers across the room to regally reclaim his throne at the conclusion of Black Panther. As the audience’s pride emanates off the screen and out into the world, our belief in Wakanda Forever lives vicariously through Carl Ulysses’ designs.