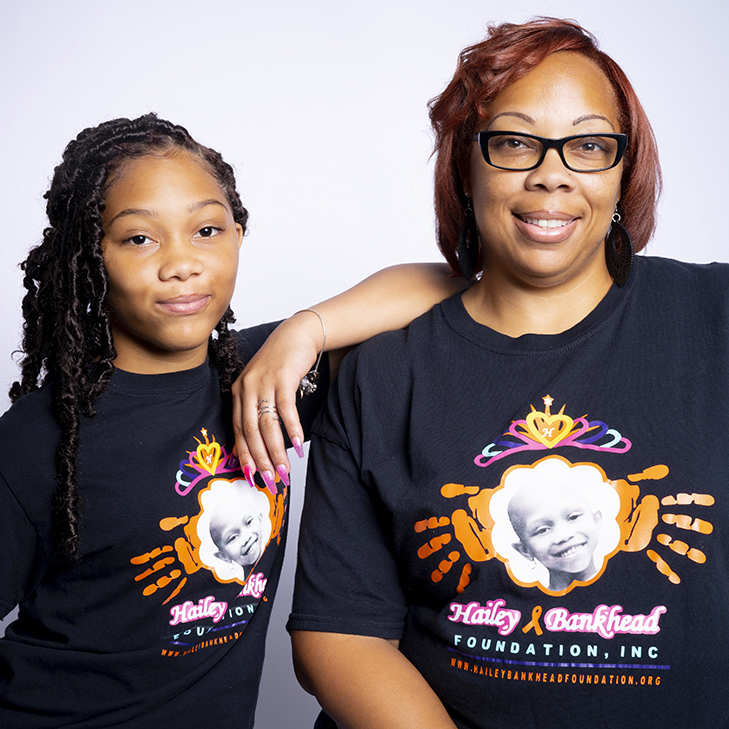 For the Tiny Humans and Those that Love Them

Hailey Bankhead is a thirteen-year-old businesswoman, sports lover and compassionate human being, among other things. She is also a survivor of childhood cancer. A month after Hailey turned five, her mother, Heather, had taken her to the urgent care for constipation and during that visit, an x-ray that would change life for the Bankheads as they knew it was recommended. Initially, Hailey was misdiagnosed with a UTI but after seeking a second opinion, a biopsy was performed that confirmed Hailey had been living with stage IV Wilms cancer and stage II lung cancer for at least six months. With the initial misdiagnosis, there was a chance that the doctors would have found cancer if they looked closer or “dug a little deeper”. But Heather persisted and in time, they discovered what truly ailed Hailey and the proper ways to move forward. “I just say, when your kid goes to the doctor, don’t take the first answer as the final answer”, Heather advises. Hailey’s treatment and recovery journey involved undergoing two surgeries (one to remove a kidney and the other to resect part of a lung), daily radiation treatment for thirty days and seven months of chemotherapy. Something Heather remembers quite clearly in the beginning was doctors telling her, “don’t cry” or “don’t be negative”, “but is that possible”, Heather had wondered? It felt implausible to stay positive in the face of a future she had never envisioned for herself and her child.

“Anything we can do to give back, we’re gonna do that.”

Today, Hailey is in remission and is now a part of the survivorship clinic. She undergoes comprehensive tests to ensure she is still as healthy as can be. “Once a year she’ll go in, she’ll do her bloodwork, her heart, they monitor everything basically to see where she is and they’ll do it till she’s an adult and then her treatment plan will change”. Her diet revolves around keeping her kidney healthy and she documents her triggers in a diary for her doctors to monitor. When asked how the cancer affects her now, Hailey said “it doesn’t really affect me anymore. I do sports, I do dance”. She makes plans for the future and has clear goals. Thirteen-year-old Hailey Bankhead has figured out something that most people don’t until adulthood; life is fickle and should not be squandered. Right now, Hailey has a cosmetics line of her own (one she plans to expand in the future) and a website from which she sells lipgloss and lashes at www.princesshaileyscollection.com. Such determination and work ethic is uncommon in someone so young, but with a mother like Heather to help her navigate the world, it is no surprise where her strength comes from.

Heather and Hailey quickly became advocates for tiny humans and those who love them. After witnessing the way their community supported them after Hailey was diagnosed, the Bankheads made it their mission to give back. Their non-profit organization, The Hailey Bankhead Foundation (haileybankheadfoundation.org) provides for other families affected by childhood cancer. “Even though her name is there, it has never been about Hailey. It’s always been about being a blessing to somebody else”, says Heather. The foundation gives more than money, too. “We’re in the hospital monthly with arts and crafts” and care packages called “Hailey Hope Bags” go out to those in need. The items in these bags vary according to family. When the Bankheads first went to the hospital, they were underprepared for the lengthy stay and now make it part of their mission to provide families with items that can make their hospital stay easier, things such as socks, toothbrushes, sanitary items, and games to keep one busy. “It is not just for the child. It is for the family as a whole”, maintains Heather.

The foundation has a fundraising gala during Childhood Cancer Awareness Month in September. It involves a silent auction and a keynote speaker to spread awareness. It will be held at the Crown Room in Eastpoint on September 11th, 2021. One can sponsor a family that has been diagnosed by buying a ticket, donating items to the silent auction or making a monetary donation to the foundation. “It is a night for you to actually see what we do, where we came from, and where we’re going”, says Heather. Cancer will never be an easy pill for a family to swallow but it does become slightly less unbearable with such measures of love and support from one’s own community.