Before this interview, the last time I’d seen or spoken to Kimberly Jones Pothier was when I saw her at Lennox Mall taking a break at Starbucks. I thought I was dreaming when I saw her because the Kimberly I knew was happily married, living in sunny Florida and the owner of an interior design business that was worth millions of dollars. That was about 8 years ago.

I’ve actually known Kim a little over 20 years. I’d joined her parent’s church, New Life Worship Center (now Church of the Harvest International) back in 1996. Her father, Henry Jones, a scholar of God’s word who preached with great authority every Sunday was stern but loving to his congregants. Ms. Ann, Kimberly’s mother, was warm hearted and kind. Pastor Rob, Kim’s older brother was an associate pastor but had already been positioned to step into his father’s place as senior pastor of the church way back then. Kimberly and her then husband, were ministers of music.

The Joneses were the model christian family filled with love, compassion and patience, at least that is what I thought.

Depression is getting alot of attention nowadays, however ten or twenty years ago, any kind of mental ailment was generally swept under the table or in Kim’s case ‘prayed away’.
“Depression runs in my family. It is something no one ever suspected about us because we were a well known family in the penecostal circle. I can never remember a time in my life where I was just like man this (life) is awesome”. “I was always driven to get more, and do more. I never knew that being driven like that could be a distraction to what was really going on – depression”. It took a divorce, having no other choice than to move in with my parents and getting a job in retail for me to realize that I’d suffered from depression most of my life,” says Kim, as she reflects on her past. 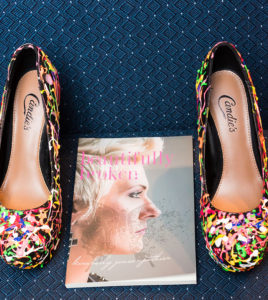 Even though she was accustomed to a good fight, none of her hardships had prepared her for the condition she found herself in.  “It was cruel and unusual punishment. “Why was God making my life even worse than what it had to be?” answering her own question, “Because He knew that I needed to be healed and the only way for me to become complete in Him was to remove every idol I’d been driven by in my past like money, cars, designer clothes and handbags. Somehow it felt like everyone knew thier place in ministry except her.   “I am nothing like my mother,” Kim says, as she reminisces about how Ms. Ann, patiently seemed to endure any unnecessary hardship. “Mom, always just let God be God. She never questioned why, she just endured. As hard I as I tried not to kick and scream but go through my trials like she went through hers, I couldn’t”.

HEALING
“I was angry and I hated people but I had  to go to work because my parents demanded that I something productive while I lived with them. So one day  I walked in Belk and told the person at the counter ( who just happened to be the maganger) that I needed a job. She looked at me and said, “We have the perfect job for you at our Estee Lauder counter.” And I’m like, “No, no way. Are you kidding me?” the manager said,  “The Estee Lauder counter  is a great fit for you.”
Having been raised in the United Pentecostal Church (UPC), all Kim could think was nooo! She didn’t know how to apply makeup, heck she never even wore makeup before. But it was the only job available. As Kim walked to her busted up Chrysler in the parking lot, she screamed at God, “I don’t even like people, now I gotta get in their face and put makeup on ‘em!” Kimberly now realizes that working at that counter was the beginning of her healing. Because about one month into her new job at Belk, she started to feel depression leave her life.

“Are you wanting to give up? You ain’t giving up, you are gettin’ up!” - Real Talk Kim

“I remember driving one day and thinking, ‘Oh my God. Man, look at the colors all around me, the sky seemed bluer, the leaves on the trees look greener, the yellow is the sun felt brighter.’ It was like my mind was expanding and opening up, and I remember the Lord spoke to me and He said, “The key in life is helping other people.” When you take your thoughts off yourself, and start helping other people, that’s when healing is realized. And man, I just fell in love with people. I remember sitting, doing makeup for people and thinking, this is what life is about, serving people by listening and encouraging them to keep moving when life is hard.

All of Kim’s life she’d heard her father and many other preachers talk about this amazing God and how wonderful he is. She never understood what that meant until His recognizable peace and wonder consumed her while she worked at that Estee Lauder counter at Belk in Fayetteville.

PROMOTION
Kim experienced promotion at a rapid rate. In less than a year she’ got promoted to  a manager’s position at the makeup counter in Bloomingdales at Lennox Square.  “Man, I thought I was hot stuff. I went from K-Mart on crack to Bloomingdale’s. I was poppin’. And I was driving a hooptie, a broke down Chrysler. It looked like a Bentley on the outside, but it was tore up from the floor up on the inside. I’d forgotten that when I drove it over about 30 miles per hour, that it would overheat. Well, Bloomingdale’s is an hour away. So when it would over heat, I would pull over on the side of I75to let it cool off. That car overheating was the greatest inconvenience  God  allowed to happen to me idid in that season. For two hours everyday, one hour going and one hour coming home, I would sit in that car and practice my new craft, preaching”.

Even though she spent her entire life in the church, Jones – Pothier had become immune to God’s word. Back in 2006 when her healing began, Kim admits that she could not recite or recall one Bible story or scripture. Here she was a preacher’s kid trying to reconnect with a Bible that she never knew. But for 2 hours, five days a week Kim made up for lost time.

FINDING PURPOSE
One day while sitting on I75 waiting for the car to cool off, Kimberly took out her phone and video recorded herself preaching. Since the car was overheatedand smoke was everywhere, she had a smoke machine that would give the recording a dramatic vibe. The message was short and simple, “Hello, awesome people! Are you sitting on the side of the road right now feeling like God’s forgotten about you? Or are you wanting to give up? You ain’t giving up, you are gettin’ up!”

Feeling inspired by the two minute video, she uploaded it to Youtube and Facebook and four days later the video had gone viral. Her subscribers went from 2,000 to 40,000 in that short time. That was the beginning of Real Talk Kim.

Real Talk Kim is the perfect social media handle for Jones – Pothier because she is as REAL as they come. Her no nonsense straight talk layered with sincere love are the ingredients she uses to see others healed.

When I think about where Kim is and how she’s grown it is hard to believe its been eleven years. Especially when I hear of her preaching on some of the largest platforms in America’s largest churches or when I troll her social media and see that she is encouraging over a million followers everyday.