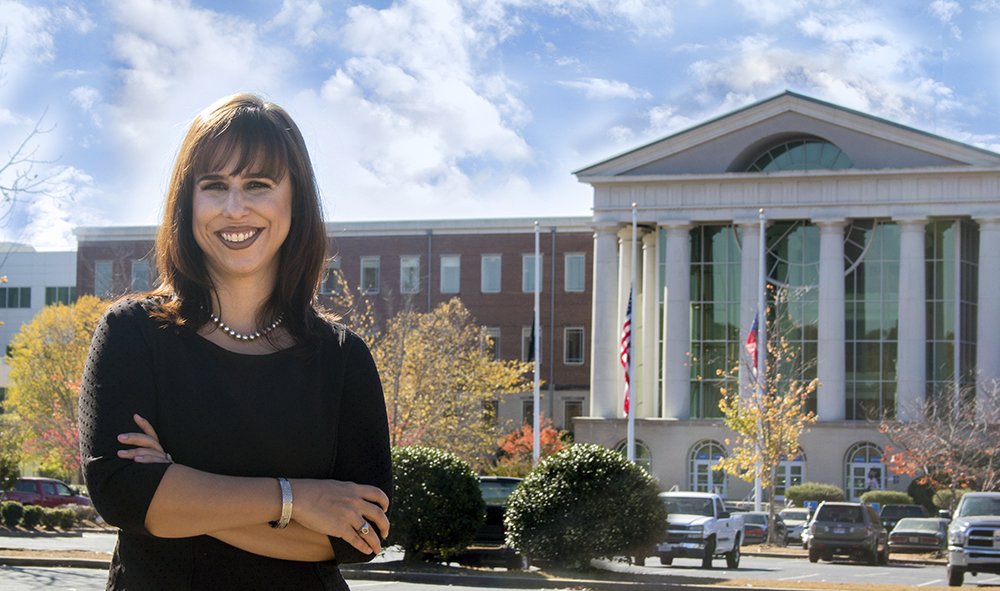 Our Hometown Girl All Grown UP, Judge Kathryn ‘Katie’ Powers

“The people who inspire me are really a group of people, not

one specific individual. When someone is charged with a felony, or

is the victim of a violent felony, that oftentimes is the worst and most

those individuals exhibit daily, then I will consider myself to be in

Equally important is the bastion of family, friends, and neighbors

from whom this lifelong resident has also drawn inspiration. “The

that existed, and still exists today,” says Powers, which makes her recent

appointment to the bench all the more meaningful. “[This] is

myself extremely lucky to have been granted the opportunity to

serve and practice law in my hometown.”

Georgia State University, where she attained her bachelor’s

degree in political science and government. She went on to earn her

Law and immediately rekindled her love affair with Clayton County–

this time from a professional standpoint. After working as an assistant

district attorney in government she was elevated to Deputy

sex crime trials on behalf of the State, and acted as sole legal counsel

on all child murder cases.

“I distinctly remember a trial that I had concerning the murder

of a one-year-old child at the hands of her father, because there was

no one there to represent the child from her family. Instead, her

only advocate was the director of the day care she attended,” Judge

Powers recalls. “To stand for that little girl when it seemed that very

few people wanted to is one of my greatest accomplishments. That

trial reinforced the fact that children do not have the opportunity

to choose who will stand for them, and that I should continue to

strive to be the best advocate for them that I can be.” Katie ultimately

Women and Children Unit, and stood in good stead on their behalf

for over seven years.

Her next position as Executive Chief Assistant District Attorney

included leading the Homicide Unit, where she represented the

profile media cases, and assisted law enforcement with the drafting

of specialized warrants and court orders in order to apprehend

the county’s most wanted fugitives. Also tasked with determining

whether the State should seek the death penalty, Katie managed all

of the litigation such decisions entail.

learning. There is never a time where you can sit down and feel as if

you know all of the answers,” she confirms. “I believe that a desire to

me to have a purpose each morning when I wake up.”

All of these roles were excellent preparation for her most recent

appointment. As one of five judges sitting on the State Court of

and traffic violations that are prosecuted by the Solicitor

General’s office, as well as all civil actions without exclusive jurisdiction

in the Superior Court.

on one level, for the past thirteen years she has lived vicariously

Team. “Participation on the JHS Mock Trial Team [as a student]

is the reason that I wanted to become a lawyer. Oftentimes, we hear

about the negative press surrounding Clayton County, but what

she boasts. “These students are truly the best of the best!”

the best person she can be on a daily basis, Judge Powers confesses

that she always intended to use her gifts to give back. “Rarely are you

work you are positively affecting your home. The people of Clayton

County have made me who I am today, and I wanted to come back

to serve the very people that invested so much in me.”

Outside of the courtroom, this Adele fan enjoys running and is currently

training for her fifth half marathon. Judge Powers also enjoys

watching Georgia football (when they win, of course.)