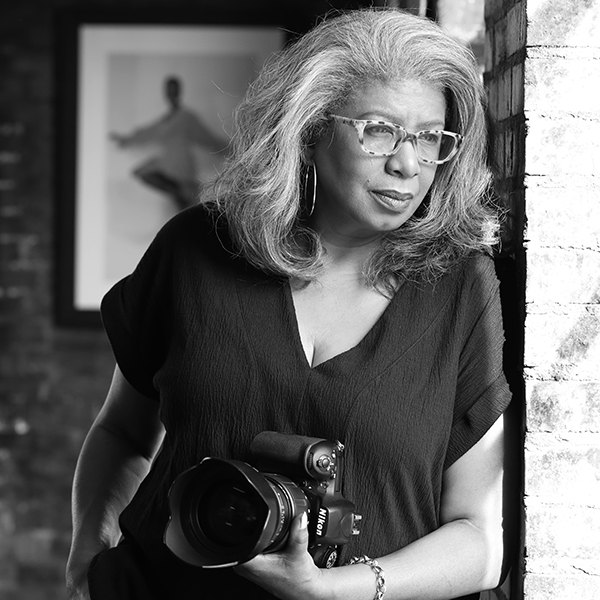 Marie Thomas has something that most people do not have, and many of those who have it don’t know it. The West End-based artist calls it her “Third Eye.” It is not like a statue of a pagan goddess with a third eyeball on her forehead. It is a way of seeing things that lay beyond the surface. Her photography captures the essence of a person, revealing an inner being.

“You kind of see things that other people overlook,” she said. “You almost have to be clairvoyant. You must be intuitive to that subject. To get to that truth you have to break down those walls so they can trust you. The goal is by displaying that image of that person, you allow other people to see differently, too.”

Thomas calls herself a “commercial photographer” because her work spans just about everything from high-end fashion photography to head shots for actors to private shoots for celebrities. When she shot the famous model Tyra Banks, the fashion icon told her that it was the first time an African-American female had been behind the lens.

“All the photographers I assisted in my early career were white. I didn’t see people like me with a camera in their hand,” Thomas said.

Growing up in Compton, California, the young Thomas dreamed of being a veterinarian. Becoming a photographer was not in her mind. When she was 14 and about to become a freshman in high school, she begged her parents to send her to summer school because she was afraid she would not be ready for algebra and other math courses. But she had to sign up for an elective class. The easiest, she thought, was a photography course.

“From the moment I actually framed the shot and then had it magically developed before my eyes in the dark room, I was stuck,” said Thomas.

Her parents indulged the new passion. Her father loaned her his Rangefinder camera that had been brought back from Germany. “I still have it,” she said. He built her a dark room. Her mother sought permission from the school district to enroll me at Compton College because her high school did not offer photography.

“I was a 15-year-old in a class with older people, so I felt cool. I was shooting everything: people, places, things. But film was expensive. It was an expensive hobby. I had to learn to make every frame count because you didn’t want to waste the film,” she said.

Photography remained a passion, and just a hobby, for years. Thomas learned to be precise in her use of Kodachrome, one of the first color films developed in 1935, because it had a complex process of developing. But she said it taught her lighting and subtle techniques of using light for photography. “That was the gift of Kodachrome. You had to be on the money. There was no PhotoShop then,” she said.

Thomas enrolled at Cal State Long Beach after high school. She was taking pre-Veterinarian classes while still shooting with her camera. A woman she met in college had taken a job with a local publication called Mainstream America. For their holiday issue the woman remembered the young girl with a camera. She asked Thomas to shoot the cover. It was 1984 and Thomas was just 20 years old. All she remembers from that first shoot is that it was a couple in front of a fireplace.

A year later she was hired to photograph the first African-American Rose Bowl Queen, Kristina Smith.

Despite this success, Thomas did not immediately quit her day jobs, of which there were many. She toiled in retail for a while, then became a lifeguard and swim instructor. She assisted several Los Angeles area photographers. At one of her assistant jobs she still kicks herself because famed fashion photographer Herb Ritts moved into the space above where she was working. She could have easily walked up the stairs to seek what could have been a life-changing position. “But I think I was afraid to step out there,” she said.

Eventually, she landed employment in the field of photography at Glamour Shot Studio, although it was in the low-key portrait studio industry. Thomas soon rose to be a corporate trainer, teaching those from other countries the corporate style of taking pictures.

Thomas also learned how to tune into her subjects. She began to develop her Third Eye that looks not at the surface features but burrows into the subject’s personality.

Her father, who worked in the aviation field, had moved to Atlanta in the mid 1980s. Thomas would visit from time to time. Through her Dad she met several opportunities to use her photographic skills. For the next decade she shuffled between Los Angeles and Atlanta.

“I would pre-book some shoots before I would visit. So, I would shoot here and then go back to LA for my 9-to-5 job,” she said. Her job at that time was working in Dialysis. On one trip a makeup artist she was working with on a shoot asked a very simple question: “Why aren’t you here?”

“I kept hearing that echo in my head. So after the Olympics (the 1996 Olympic Games held in Atlanta), I made the move permanent in 1997. Atlanta was a much better market for me because there is a photographer on every block in LA,” said Thomas. “Now, 24 years later, I haven’t punched a clock for anybody else since then.”

Much of her work is considered fashion photography. Credit her mother with instilling the basics of fashion shooting because she gave her daughter a subscription to Vogue when she was very young. While she loves the work, she does not want to be put in a box. “I don’t want to be just a fashion photographer,” said Thomas.

The ebb and flow of work in Atlanta has shifted over the years. Atlanta was once a hub for fashion models. That work began to be uneven as the music industry, led by the creation of LaFace Records, became a dominant player. Thomas was hired many times to shoot private events and individuals in the music business.

“Those artists trusted me to come into their private homes. They knew that their personal lives were safe with me,” she said.

Thomas is an admitted “old school” type of film photographer who was dragged into the digital age kicking and screaming. She would have never switched from film to her Nikon 750 if it didn’t become nearly impossible to buy quality film. The last straw was when a lab took her beautiful film shots and digitized them. The result was a muddy, soft image that negated all her efforts.

“You don’t have to be as disciplined with digital images. I think a lot of photographers waste too many frames,” she said.

Over her time in Atlanta, she has shot  over 120 covers.  Her work has also been published in Ebony, Atlanta magazine, Black Enterprise, and Atlanta Home and on internet sites such as Cosmopolitian.com and Seventeen.com. Today, much of her work is doing headshots for aspiring actors. She has a flyer headlined “Headshot Madness” that can be found around Atlanta. As more productions return to work after the pandemic, her calendar is getting full once more.

Thomas usually can be found in her studio located in an old Sunday School building that was built in 1922. There are times, however, when she takes to the streets with what she calls “rogue shooting.” One example is a series of a white-haired model dressed in a metallic outfit contorting around a solid white sculpture. She won’t reveal where the images were taken.

“When I’m walking or driving, I’m always looking for unexpected places,” she said.   “Locations can transport you to places that a studio cannot.”

There are several photographs that Thomas has shot that can be described as serious art. The best illustration is a five-foot-tall shot of a church window where four young girls are standing with their backs to the camera. It is a haunting shot. She calls it “Four Little Girls. What Hate Took Away.” It is in memory of the four girls killed in the 1963 bombing of the 16th Street Baptist Church in Birmingham, Alabama.

“I took that downstairs in this building,” she said. “I’m a full frame shooter. I hate it when someone crops my pictures. I still try to shoot things as perfect as possible.”

Despite the change from film to digital photography, Thomas said the job has not changed.

“The ultimate goal is to make people look good,” she said.